DR. KUNKES RECENTLY FEATURED IN THE CT POST – TIME TO TAKE A STAND 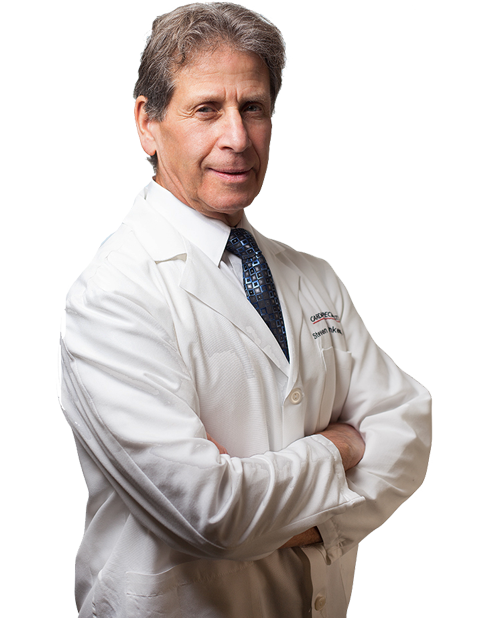 You might think all that time spent sitting at your desk is helping you to get ahead in your career. But, increasingly, it is becoming clear that the best thing you can do is to stand up and take a break.

“Sitting for long periods of time is not healthy, and can negate the effects of exercise,” said Dr. Steven Kunkes, a cardiologist with Cardiac Specialists in Fairfield as well as the medical director Cardiac Rehabilitation Program at Bridgeport Hospital.

And, it’s not just a case of flabby muscles or a few extra pounds. Such inertia can, among other things, slow metabolism, decrease good cholesterol and affect insulin’s effectiveness in getting the cells the energy they need. These metabolic effects can increase the risk for obesity and certain chronic diseases, such as diabetes and cardiovascular illness, as well as some cancers.

“This is way beyond not being active and consuming more food,” said Dr. Eric Roccario, a cardiologist with St. Peter’s Health Care Services and Prime Care Physicians in Albany, N.Y. “Sedentary behavior has become a risk factor, in and of itself.”

The idea is that even those who keep an eye on what they eat and get in some moderate, prolonged exercise several times a week may not be doing enough to counter the effect of the lack of motion. American Cancer Society researchers, for instance, recently found that more time spent sitting was connected with a higher death rate. Over the course of 13 years, the researchers followed the health of more than 123,000 men and women. It turned out that men who sat more than six hours a day during the years of the study (1993 to 2006) were 18 percent more likely to die than those who sat for three hours or less. The death rate for women who sat more than six hours day was 37 percent over those who were seated three hours or less.

“We all do a lot more sitting these days, and a lot less manual labor,” said Dr. Stuart Zarich, chief of cardiology at Bridgeport Hospital, noting that technology has contributed to the sedentary lifestyle. And, he said, there’s also the natural phenomenon of aging, which can exacerbate the situation.

“Each decade, there is a little less muscle mass and more fat, requiring us to constantly adjust,” he said. “As they say, it’s easier to get out of shape than in it.”

You might think all that time spent sitting at your desk is helping you to get ahead in your career. But, increasingly, it is becoming clear that the best thing you can do is to stand up and take a break.

Getting back in shape was a battle Westport resident John Blossom, 57, who runs the Westport-based marketing company Shore Communications Inc., had to fight several years ago.

“I was your typical office worker,” Blossom said. “Between the stress and not exercising, too many sweets, the whole thing … the weight kept piling up … until one day, I found myself at 230 pounds running for a train.”

lossom caught the train that day in 2008, but immediately felt that something wasn’t quite right. Ten months later he discovered he needed surgery for a couple of blocked arteries. A success, the procedure also paved the way for what Blossom called “a second chance at life,” which included an education in healthier habits. He credited the cardiac rehabilitation program at Bridgeport Hospital, as well as changes in diet and attitude, as getting him back on track.

Blossom, who is Kunkes’ patient, said he still spends multiple hours at his desk, but he has adjusted nearly everything else, such as making sure he reaches for the healthy snacks, drinks lots of water, takes breaks often and focuses on something other than work.

“I’m not saying I have as much energy as when I was young, but I have a lot more than I used to,” he said. “And, on the flip side … it’s now three years later (since his operation) … and a couple of months ago I was in the same situation. I was still late and running for the train, probably the exact train, but I made that train and I felt great.”

Little changes throughout the day can counteract some of the adverse effects.

Alicia Hirscht, a physical therapist with Orthopaedic and Neurosurgery Specialists of Greenwich works with patients to counter the effects long hours of sitting have on the neuromuscular system. And the list is fairly long, including such ailments as muscle strain, disc disease, lower back pain, joint disorder and repetitive stress injuries.

The remedy is a mixture of ensuring that the patient has a properly designed work space to prevent repetitive injuries and that he or she gets up and moves every half hour — even if only for a few moments.

“There are a number of quick stretches and exercises that can be very helpful,” Hirscht said, adding that even the simple process of standing up is useful. If you have time during your lunch break, take a quick walk.

All those efforts also might have the effect of making your actual workout time outside of work all that more effective. As Dr. Scott Simon, a neurosurgeon with Orthopaedic and Neurosurgery Specialists and Greenwich Hospital, noted, prolonged inactivity can stiffen up the muscles, leaving them more susceptible to injury.

“Really, movement is key,” he said, but added that it is equally important to reduce the stress associated with modern life.

“We put in long hours and try to exercise very quickly and eat as quick as possible and all that builds up a lot of stress,” he said.

“I think our consciousness is not set on getting yourself active, but on how to save time,” Kunkes added. “But, the good news is that exercise does not have to all be done in a single session. It can be done 10 minutes at a time.”